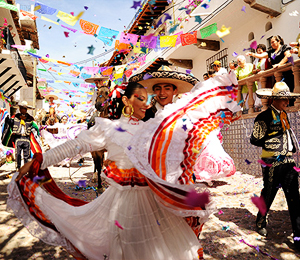 Puerto Vallarta is situated on the Bahia de Banderas (the Banderas Bay) on the Pacific coast of Mexico. The area is one that was not very populated or well-known until the mid-20th century, when tourism in areas all around the Banderas Bay, but especially in Puerto Vallarta, became one of the major industries. The regional identity and culture of Puerto Vallarta and the surrounding Pacific coast/Banderas Bay region is one that sticks to traditional Mexican customs and cultural characteristics (such as a strong focus on one's family, the cuisine, and the welcoming and relaxed pace of life that much of Mexico is known for), but differs in certain areas. In particular, Vallarta and the surrounding villages are known for their unique appreciation and support of the arts, which creates a regional culture that places extra focus on visual arts, theater, music, international food, and cultural events. It is for this reason, this appreciation and support for art and culture, that Puerto Vallarta became known as the San Francisco of Mexico

The area is also known for its increasingly liberal views on lifestyle and culture, probably thanks to the influx of tourists and ex-patriots to the area. While most residents still retain somewhat traditional views on family and marriage, the gender roles in these families have been less strict in recent decades, with women finding more and more success in career options and in equality in general. Puerto Vallarta, the biggest urban center in the entire region, is particularly welcoming and supportive of women, as well as gays and lesbians who will find plenty of options for gay bars, clubs, and cultural events in Puerto Vallarta.

One of the defining characteristics of the Puerto Vallarta cultural identity is the influence of tourism. The city and its cultural identity have to balance the increasingly popular tourism industry with the need to preserve historic buildings and the need to house the influx of workers that flock to the city for jobs in the industry. This fast influx of money and tourism to Puerto Vallarta also adds an imbalance in the class statuses of locals, with rich tourism moguls living in lavish summer homes alongside poor blue-collar workers living in crowded multi-family houses.

WE WON'T BE BEAT ON PRICE!

To prove it we are matching all online pricing on the tours we offer.